This delightful, large "Belle Epoque", detached, country home, built in 1875, has all the essence of the Galician word "enxebre" - traditional, warm, typical, of the old style..going through the front door it genuinely transports you back in time!

Set back off a country road in the hamlet of Oca, with the magical and emblematic Pazo de Oca, as its neighbour and with other fine houses in the vicinity, you are in beautiful, lush countyside here, watered by the Rio Ulla.

Lovingly cared for and artistically presented with antiques and family artefacts and paintings, this was originally the home of the local doctor. Still in the same family and though, so strongly linked to the past with its pristine flagstone floors and many other original features, you have most of your modern comforts here, including four bathrooms and three spacious, living rooms and WIFI.

With central heating and an open fireplace, it makes a good choice for out of season, whilst its large, enclosed garden with vines and fruit trees, is a joy for all ages in the warmer months. Both the house and its grounds, full of charm and character, ensure that you will relax and unwind.

Just half an hour south of magnificent Santiago de Compostela, an hour to the interesting cities of Ourense and Pontevedra and less to the lovely beaches of the Rias Baixas, you are very well placed here for exploring this very special corner of Galicia.

Front gate opens into pretty, enclosed garden. Stone path to front door. Front door opens into the entrada and hall with its original stone floor. Off this to a "reception" room and from this into the living room with a dining area and a sitting area with an open fireplace. From this to a country style kitchen. Door from this back into the hall and the entrada.

From the hall, door onto small patio with a fixed stone bench and steps down to large, enclosed back and side garden.

Off the hall is a full bathroom and a small passage leading to a huge, high ceilinged living room with a door onto the back garden and a large wooden double door onto the front garden.

There is a sitting area and three dining areas here.
There is a large screen which separates this from a storage/utility area.

From the hall a wooden staircase leads to the first floor and the landing with a sitting area.

Off the landing are four bedrooms (two twins, one double and one triple) and two bathrooms (showers only).

From the landing there is a further wooden staircase to the attic floor with a large sitting room and bathroom (shower) and one bedroom (double).

Though Oca is a small, sleepy hamlet in the municipality of A Estrada, in the province of Pontevedra, just half an hour south from Santiago de Compostela, it is on the tourist map as its star attraction is the magnificent Pazo de Oca - a beautiful old baroque mansion with an enchanting garden of camellias and topiary adorned with statues, ornamental lakes and fountains.

Set in lovely, lush countryside with the Rio Ulla running by, it has a chemist's, a doctor's surgery and a small bar/shop selling essentials. There is also a restaurant at just under two kilometres away and the pretty, little, medieval village of Ponte de Ulla with three restaurants, a supermarket, a good bakery, a filling station and a bank is five kilometres.

The furniture making town of A Estrada with all facilities including a covered market and a weekly market is twelve kilometres away.

A bit further away are the attractive spa towns of Cuntis and Caldas de Reis.

Beautiful beaches in the Rias Baixas are a fifty minute drive, but you can swim in the river in the village and within an easy drive are river beaches in Ponte de Ulla and at A Carixa in Merza.

Numerous Romanesque churches are dotted around the countryside and the monasteries of Acibeiro and Carboeiro are must visits.

The local area is one of great traditions, including the fascinating fiesta of Rapa das Bestas (horse shearing festival) held at the beginning of July in the village of Sabucedo. 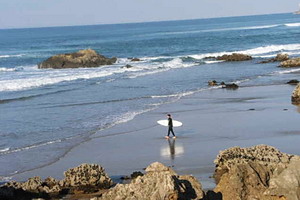 
Shellfish from the Rias Bajas


Catamaran down the Rio Sil.

The Rias Bajas region in the south of Galicia is well served by air:

Ferries: Plymouth or Portsmouth to Santander or Bilbao  7 sailings weekly. Ireland to North Spain - 2 sailings a week.
We can include the ferry crossings as part of the package

If travelling by air we recommend renting a hire car to make the most out of your visit to the area. If you prefer to use public transport please consult our expert staff for advice on which properties are more suitable.

If coming on the ferry you will use your own vehicle - we recommend that you ensure that insurance and breakdown cover are in place. For full advice on how to prepare the vehicle etc see the Brittany Ferries website

In either case we will provide full instructions to arrive at your holiday accommodation, complete with GPS co-ordinates. 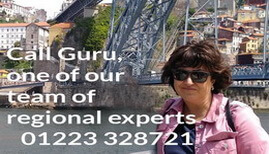