This charming C18th century manor house, tucked away in a quiet corner of the historic city of Lugo, in a pedestrian street, nestling beneath the impressive Roman walls, must be one of the most delightful city hotels anywhere.

Beautifully restored, elegantly furnished and decorated with fascinating paintings and ornaments, it is a museum piece in itself, whilst providing all modern amenities. Its twelve individually prepared bedrooms, including two suites, are cosy, spacious and stylish, some with views of the walls.

Family run, an added bonus is the friendly and attentive staff who will ensure your stay is a comfortable one and who will advise you how to get the best out of Lugo and its sights. Here, you are within easy walking distance to many of them, including the cathedral, originally built in 1177, the attractive Praza Maior with its C17th century Bishop's Palace and the Praza do Campo which was the Roman Forum. For the energetic you can walk the two kilometres of the walls before enjoying the gastronomic delights on your doorstep.

There are twelve individually decorated and furnished bedrooms with wooden floors. All have ensuite bathrooms, a minibar, a safety box, a telephone, a hairdryer, bathrobes, T.V., air conditioning and WIFI. Some have views of the Roman walls.

There is a room with facilities for the disabled.
Cots are available on request.

The hotel has a bar/cafeteria. It also has a well known restaurant "Restaurante Campos", a very short walk away.

There is a sitting area on the ground floor, a lift, WIFI, laundry service and room service and a massage service.

Parking is in the hotel's own car park at the side of the hotel. This is enclosed, but open air. It is locked at night. It is 13.20 euros a day. No need to reserve.

Some of the staff speak English.

A buffet breakfast is served in the bar/cafeteria on the ground floor of the hotel.

The hotel has a well known, long established restaurant (1952) "Restaurante Campos" a very short walk away at Rua Nova 4. Set in an C18th century building, it has a modern tapas bar and classic dining rooms. A quality, varied menu (fish and seafood a speciality) with an excellent wine list. It is closed on Sunday evenings and Mondays. Opening hours are 13.00 -16.30 and 20.00 -24.00.

Very close by, within the walls you have a very good choice of tapas bars and restaurants to suit all pockets.

The fine old city of Lugo, the capital of the province of the same name, in Galicia, has long been a detour for pilgrims on their way to Santiago de Compostela and boasts the best ancient walls in Spain, wonderful slate walls enclosing the old town, magnificently preserved from Roman times. A sight to be seen with 85 rounded towers and four gateways.

Added to this is its amazing Cathedral, originally built in 1177, modelled on the cathedral of Santiago with the rare privilege of manifestado (always having the host on display).
There are picturesque squares and streets with other important civil and religious buildings, but one of Lugo's other fames is food. The Galician's having a saying which literally means to eat, go to Lugo. It is great for traditional Galician food particularly pulpo - octupus and the tapas bars on Calle Cruz and Rúa Nova are full of atmosphere in the early evening.

During the first fortnight in October Lugo celebrates the Festival of San Froilán which originally represented a period of preparation for the coming of winter. There are all sorts of culinary delights and street stalls selling traditional Galician products and bubbling copper cauldrons of octupus, combining an exceptional meeting point between the urban and rural worlds.


Catamaran down the Rio Sil.

Santiago and the interior of Galicia is well served by air:


Please ask us for advice on ferry crossings, timetables and flexible start dates to fit with the crossings.

If travelling by air we recommend renting a hire car to make the most out of your visit to the area. If you prefer to use public transport please consult our expert staff for advice on which properties are more suitable.

If coming on the ferry you will use your own vehicle - we recommend that you ensure that insurance and breakdown cover are in place. For full advice on how to prepare the vehicle etc see the Brittany Ferries website

In either case we will provide full instructions to arrive at your holiday accommodation, complete with GPS co-ordinates. 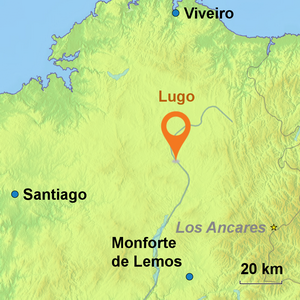