At the very heart of the Picos de Europa National Park and 1134m above sea level lie the two glacial lakes of Enol and Ercina known as the Lagos de Covadonga due to their proximity to the basilica and shrine to the virgin of the same name, who is said to have inspired the first significant victory in 722 of the Christians over the moors on this same site. The lakes are also famous for featuring in the Vuelta de España cycle race, the toughest of all its climbs, won by the Scotsman Robert Millar in 1984. 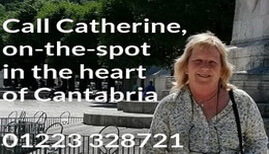