From as far back as I can remember, almost every summer brought our yearly holiday to Cantabria, when my two sisters and I would be packed into the car in the early hours one morning and driven off to catch the 24 hour ferry to Santander (an experience we loved almost as much as the holiday itself- our little cabin with beds that folded down from the wall, running around on deck, the tiny cinema down below and the even tinier swimming pool – we became filled with the excitement of adventure and the prospect of 3 weeks of freedom).  We were on our way to sun, sea and sand, Spanish food, our cosy rural casa and village life in the green and lush land of Northern Spain. Over the years I’ve come to know and love its regions, and always look forward to returning.  I’ve had many a family holiday there, taken friends, honeymooned near Carnota beach in Galicia and am now looking forward to taking my 3 year old son there in a couple of weeks- hopefully letting him relive some of my own favourite childhood memories. 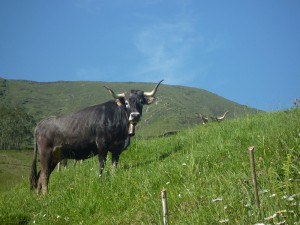 Although a lot has changed over the years, I love that Northern Spain still holds onto its traditional roots, and a less frenetic pace of life. When we first used to visit and stay in the village San Vicente del Monte, ours was one of the few cars used there – horses/cattle and carts and the odd motorcycle suiting everyone else. Now cars are owned by all and the village is more connected to the outside world, but not all that much has changed- the sounds and smells of rural life, and the people who live there remain as familiar as ever: the morning wakeup call is still the sound of cows being herded past the window on their way for a day’s grazing in the fields, their bells heard throughout the day in the distance; children that we once played with during our holidays are now grown up and have children of their own who in turn run around the village like their parents once did.

I love the variable climate where the morning may bring misty rain in the mountains (the reason why it’s so green and lush) but pop into the car and head to the coast and the sun always appears bright and warm (we would always come back brown as buttons!). The blue sky is so clear and bright when the clouds disperse.

As children it was the beaches that drew our attention- days spent on the long, sandy stretch of Oyambre swimming in the estuary or jumping and surfing through the waves;  the cove of Cobreces where we explored and adventured amongst the rocks,  or the town beach of Comillas– a lovely place to swim, make sandcastles and sunbathe- we loved it there too as it was near to the delicious seafood restaurant overlooking the harbour where we would feast on rabas and sardinas, and then later on go and buy ice creams in the town!

But there was also so much more to explore and appreciate- the food, the culture,  festivals, beautiful towns and villages, amazing walks and stunning views- all things that make for great holidays and spur ideas and enticements for future ones. Through this blog I hope to recall some of the memories of the places I’ve stayed in and visited to capture a sense of the Northern Spain that I know and love…

Featured properties in or near San Vicente del Monte: La Palmera, Casa Nieves, Casa Cristobal and Casa La Revilla. Or experience this and other parts of northern Spain on one of our touring holiday.

One Comment on “On our way to sun, sea and sand…”